The September meeting of the Bloomington-Normal Modern Quilt Guild was led by our new Executive Board co-president, Kathy M., and was called to order at 6:00 p.m. at Christ Lutheran Church in Normal. Kathy introduced her “other half” of the co-president team, Stormy H. A quick announcement was made about a new procedure for locking the doors at 6:00 p.m. for security purposes, at the request of Christ Lutheran. A sign will be hung on the door at each meeting with a phone number to call/text for anyone arriving late and needing to be admitted.

Treats were provided by Leslie S., Donna P., and Kathy C. Our new social time arrangement is for members to bring their own drink, minimizing the need for beverages and plastic cups to be provided by monthly snack providers.

We welcomed 44 members and 1 new member, for a total of 45 members in attendance! A reminder was announced that the “Members” section of the website (password needed) has all personal contact information for members of the guild. Nancy P. also announced that on the members only page website, a downloadable reimbursement form is available for completing and turning in (attach receipts to the back of the form) to her as treasurer.

for that will open on 10/5 and close on 10/25. Registrants for the Mini Swap will be notified of their “partner” on 11/2. Next month, Kathy M. will have a laptop available to register interested members for QuiltCon. Registration is free to paid members of any local modern quilt guild, which automatically affords membership in the national guild through our annual dues. Registration for QuiltCon closes in November, so October’s meeting will be a great opportunity to register if you haven’t already done so.

Nancy P. announced a mini-heart challenge for the charity quilt at QuiltCon. It uses paper-

piecing to complete the mini-hearts, and Nancy provided packets with the paper-piecing template and all fabric needed. A 1.5 stitch length is suggested, along with 50 wt. thread, if you have it. A larger needle can be helpful, but a regular size needle should be sufficient. Titanium needles from Superior Threads was mentioned as a good source for paper-piecing needles. Completed blocks can be turned in at the Quilt Retreat (10/5-10/8) or at next month’s meeting. The October meeting will feature a paper-piecing program element!

Our guild retreat to Springfield will take place 10/5-10/8. Two meals per day will be provided – brunch and dinner. Kathy C. has the food schedule, and roommate assignments will follow.

Sue K. showed the block lotto for October. A short explanation of this monthly feature was provided to members who were not familiar with the concept. The cost is $1 for every block finished. A discussion followed regarding the “current rule” of not winning the block lotto

until you’ve brought back the completed quilt (made with the winning blocks). By a show of hands, the guild voted to eliminate this “rule,” instead opting for “self-monitoring” by the winner of the block lotto. The goal is to encourage participation and have fun with the designs and raffle.

Kathy M. read a note from Kathy C. thanking the guild for their gift of a quilt to commemorate her two years of service as Guild president.

After half-time, Cindy R., who is now coordinating the monthly survey question (on the white board), summarized the results for us.

The door prize winner from the survey questions was Nancy P. The fabric raffle winner was Lisa B. and Betty W. won the 15 blocks from the Block Lotto.

Vice-President Cathy H. announced that she had a quilt accepted into an international juried show in Tennessee! Show and Tell came after “half time” (Kathy M. apologized for the “hiccup” in the schedule!). Nine members showed us their beautiful creations. 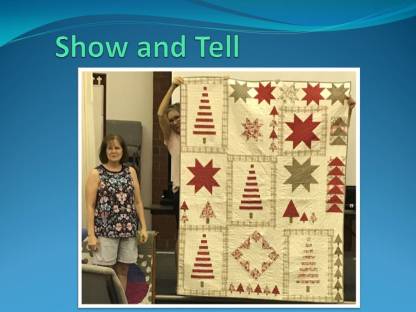 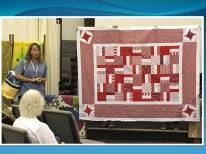 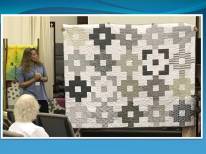 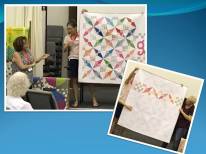 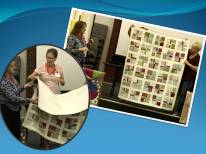 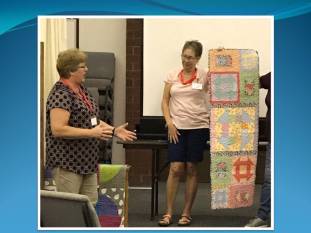 The program was provided by the delightful sister team of TailorMade…by Design, Joanie Holton and Melanie Greseth. They are both

from Minnesota; Joanie still lives there, and Melanie is moving back after living for a few years in Peoria. This creative and inspirational team started in garment sewing for manufacturers (primarily for displays at market or for large clients purchasing a particular line of fabric) and later morphed into quilts. As young mothers with children, this allowed them flexible work schedules and the opportunity to collaborate as a team on seasonal (market-driven) work.

Melanie said that they kind of “fell into” the quilting aspect of their business. Some garment fabric manufacturers for whom they worked asked if they could do quilting. “Sure!” was the answer, and that has driven this dynamic duo to a business that, 200+ manufacturers later, involves their family members (all grown up now!). Some years ago, Benartex asked if they could “take over” the display aspects of their booth at Quilt Market, and once again, the answer was, “Sure!” They travel to New York City eight weeks prior to Market to see the fabric lines and meet with the designers. Benartex encompasses Contempo and Kanvas lines, which they also see in NYC and at the Benatex warehouse in Rhode Island, immediately following the NYC designer meetings.

Their work is extremely time-sensitive, and they thrive on that creative energy, which they have creatively assigned the moniker, “Kick It Out Quilting!” They now have quilters who piece and quilt for them so that they can focus on this side of their business. They also do a lot of free patterns and have written 2 books, Daily Zen and Easy-Sew Quilts (which were available for purchase by attendees). Photos nicely depicted the “rough side” of what they do, from their corner of the Benartex warehouse where their display props are stored to their 60’ trailer that they use to get to Quilt Market with all of their props for the 1600 sf Benartex booth.

They use “EQ” software for most of the math of their patterns. Melanie has a graphic design background and tends to be the vision behind the thematic displays in the booth, and Joanie is the executor of that vision. Together, they make a fun and fascinating team who have taken their inherent talents to a level most of us would never imagine. 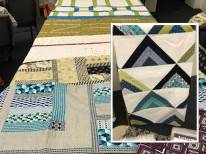 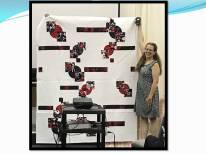 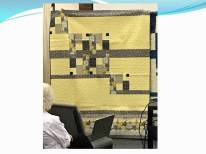 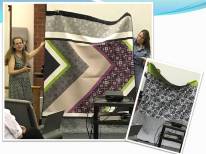 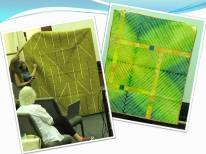 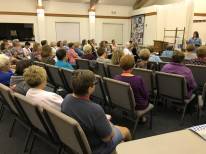 The meeting adjourned after the presentation.

One thought on “September 2018 Meeting Recap”